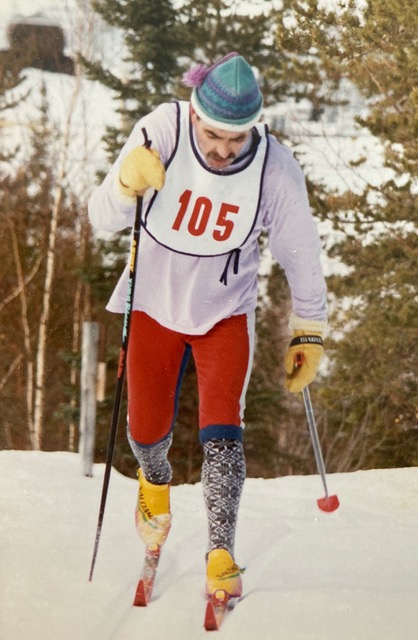 Cross Country NWT is proud to share this tribute to the late Stephan (István) Gyapay from his family. Stephan passed away on February 27 this year. We know his loss was felt by many in the NWT and the sport of skiing, and our thoughts are with all who knew him.

Born in Hungary in 1941, Stephan immigrated to Canada with his family in 1957 and settled in Sainte-Anne-de-Bellevue, Québec. Deeply connected to nature and sport, Stephan was an accomplished competitive paddler, national record holder in canoe and kayak and an avid cross-country skier and Nordic athlete. Stephan began cross-country skiing recreationally as a teenager in Québec to explore the outdoors and later skied competitively with the Ottawa Ski Club and Viking Ski Club in the 1960s and 1970s.

Highlights of Stephan’s cross-country endeavours include his participation in the 1966 Canadian National Championships in Nordic Combined (ski jumping and cross-country skiing) and the 126-mile Centennial Ski Race from Montréal to Ottawa in 1967, where he was presented an award by Jackrabbit Smith-Johannsen. Stephan had an ardour for distance skiing and was a long-time participant in the Canadian Ski Marathon since the inaugural event in 1967. He proudly skied his last Canadian Ski Marathon in 2013 with his sister and brother-in-law.

While working in Banff, Alberta in the 1980s Stephan continued to ski competitively. Once Stephan moved to Yellowknife in 1988 he participated annually in territorial and local ski events. In addition to the lifelong friendships forged through skiing, some of Stephan’s fondest memories were of his recreational skiing adventures in Yellowknife with his wife Christine, irrespective of temperature or time of day! Above all else skiing offered Stephan a means to explore and stay connected to nature. Since moving to Hay River in 1992 Stephan and his family have been active members of the Hay River Ski Club. Stephan could often be found skiing, jogging, clearing brush along the trails or chatting with members in the parking lot!

Through his lifelong involvement in cross-country skiing Stephan developed an avidity for the sport’s history and loved to share his knowledge with family and friends. Stephan was known for his exceptional memory for names and dates and could often be found editing skiing books and articles for accuracy. When Stephan was not exploring rivers, lakes, mountains and forests on cross-country skis in the winter or by canoe in the summer, he continued his outdoor travels to remote locations around the globe in his armchair.

Stephan keenly followed the sport of cross-country skiing until his final days. He was deeply proud of his daughters’ Ilona and Julia’s skiing pursuits and avidly shared details about their endeavours with others. Family and friends of Stephan with whom he shared his passion for cross-country skiing will continue blazing trails over tranquil landscapes, ease their stride to appreciate the sights and sounds of nature, proudly sport ski toques, and double pole in his honour.