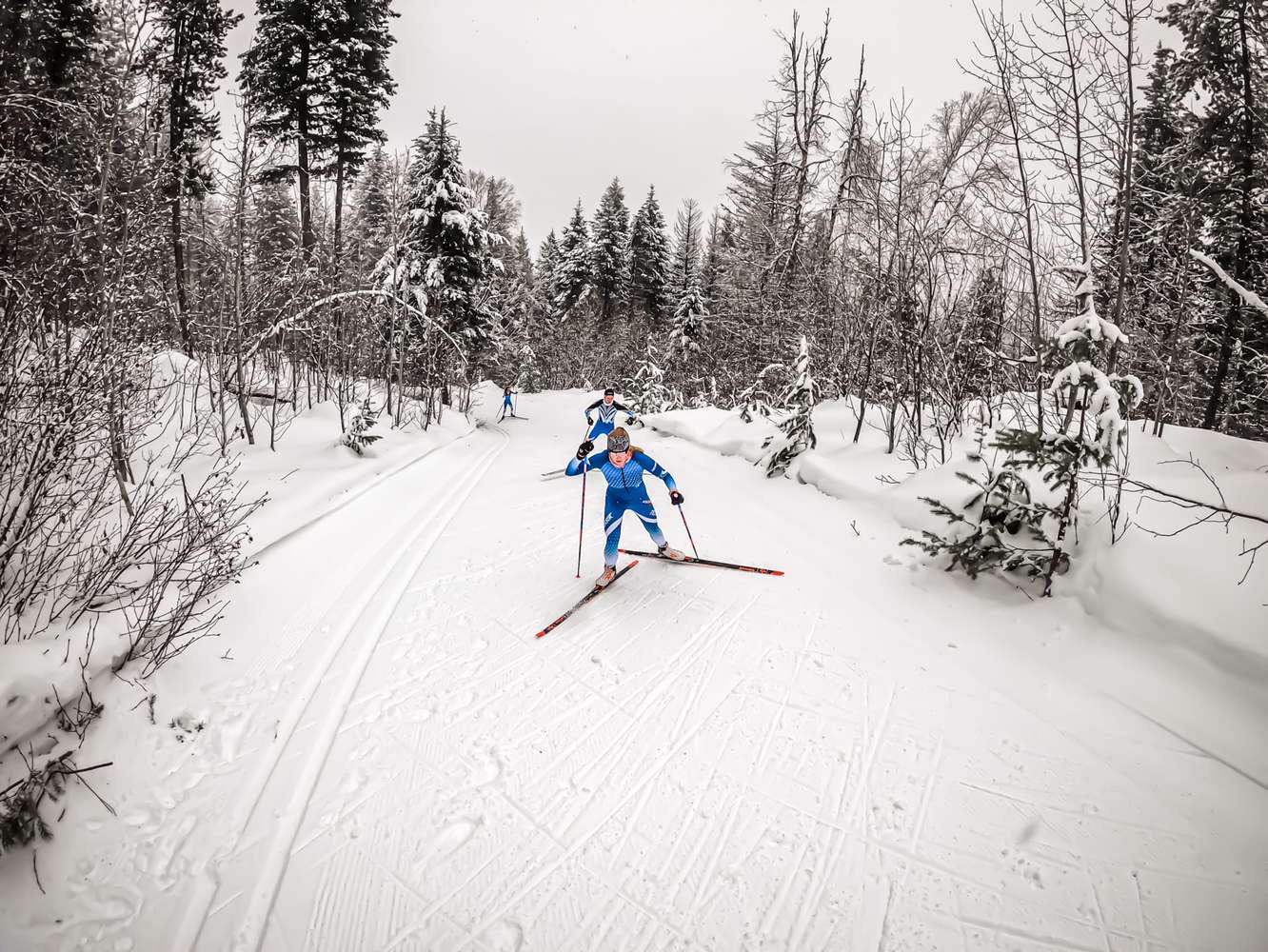 Jack Panayi, Nicolas Bennett, Clair Littlefair, and Ella Kokelj were recipients this year. Funding was awarded by a committee following consideration of each application.

For reference, you can find the policy and application form for this year’s grants. Grants from $200 to $2,000 were available.

Below, you can read reports from Jack, Nicolas, Clair, and Ella about their 2020-21 seasons! 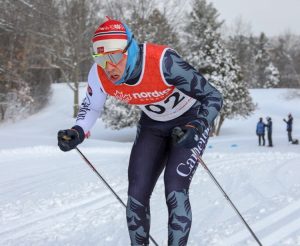 Unfortunately this season was not the one everyone hoped it would be. I decided to stay home in Yellowknife until February because Ontario was in and out of lockdown. I had a great early season here but I was very excited to make it back to Ottawa and resume training with my team.Though there were no races this season, I was lucky enough to be in a city with enough skiers to have several very competitive time trials. These allowed me to test my fitness against other athletes and get those racing feelings back.

Although we all wished we were racing, the lack of races allowed us to branch out from our usual training. It was tons of fun to spend so much time on skis, discovering new trails around the city and in Gatineau Park.

The money from [Cross Country NWT’s Post Secondary NWT Skiers Grant] went toward new classic boots and the rest I am saving for next season, which will be much more expensive than this one as (hopefully) we will be travelling the country for races again. 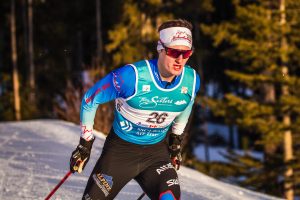 Cross Country NWT’s Post Secondary NWT Skiers Grant has provided me with funding and support I need for the past two years and has been a major asset in my pursuit of excellence in cross country skiing.

This year, with the pandemic, it has not been easy. COVID-19 eliminated all opportunities I had to race this year in anything that would give me points. Though my career has been on hold for over a year now, it has not taken away my ability to improve as an athlete.

With my team, the Alberta World Cup Academy, situated in Canmore, I was given many opportunities to improve my performance on snow throughout the season. Starting off with an early-season training camp on Frozen Thunder (snow set out on a 2.5km loop made from the previous winter’s snowfall) in early October in Canmore, I got the chance to train two to three sessions per day and after two weeks, racing a series of time trials to see where I stand in terms of fitness following the summer months. Having spent my summer putting in between sixty to eighty hours of training every month, without full-time job, of course, I stood very strongly amongst my peers. The motivation this gave me helped shed a new light on the coming season I was about to have.

Highly motivated, I was excited to put in a lot of hard work and see where I could be standing when this pandemic finally comes to an end. Thanks to my equally excited team, the season brought me multiple training camps, again in Canmore and in the Kananaskis region (a little harder this year to travel to BC from Alberta), along with multiple time trial series arranged by my team and Nordiq Alberta. My most exciting racing experience and peak of the season was at the Lake Louise to Banff Loppet Race Virtual Challenge, or, “Corona Challenge,” as they called it this year. As the name suggests, it was a COVID-friendly race in which I participated the Solo 72km category, coming fifth with a time of 4:52.08. This was an amazing experience because it showed me just how much my hard work was paying off since in previous years, I would not have come close to that time in such a race, especially not when I am technically only racing against myself. In addition, it gave me great confidence mid-season to keep pushing myself in training because on a normal year, as a first-year senior man, I would have been racing my first 50km race with a much stronger field than I have ever faced before.

Not only did I take advantage of my training this season, but I kept at it in my academics as well. Having chosen my degree major (Political Science), I took a full online course load in order not to let the pandemic slow down my earning of my degree.

Sadly, none of this comes free. Along with my team fees which allow me to train with world-class coaching and athletes, I have travel fees (on top of the back-and-forth from Calgary to Canmore), training camp fees, accommodation, and registration fees. Not to mention my rent, tuition, and book fees. Cross Country NWT’s Post Secondary NWT Skiers Grant supports me in all of this. Without grants like this, I would not have the chance to pursue this sport I love. Thank you to the Cross Country NWT Selection Committee for selecting me for this year’s grant. 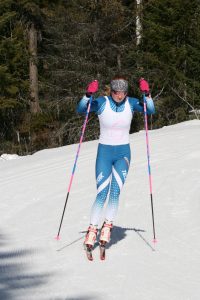 First and foremost, thank you! Thank you for the continued support as I pursue skiing and getting my degree. As we all know, this year was weird due to the dreaded Covid-19; and as a result, there were no legitimate races to attend.

Without any racing, there were some blessings in disguise from the season as a result. For instance, I ended up increasing my hours of training to equal an additional month just from not tapering and traveling. We were able to do a lot more on snow intensity and baseline tests to do arms only and legs only time trials. Telemark was not allowed to run sanctioned races or have any teams travel to Kelowna, but have no fear! We still did many races/time trials with the race team; we had to make our own bib for the season, as sharing bibs was a big Covid no-no. This season allowed me to improve my strength, endurance, confidence, and technique, and in the end, I am thrilled with the season even without racing. The other benefit of no racing is that I was able to pursue the opportunity of coaching Track Attack and the U10 Jack Rabbit group. 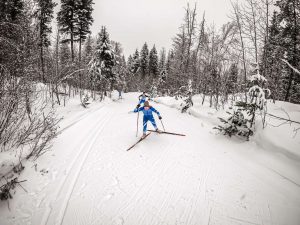 Thank you again; the support means a lot to me, and I know this is something that few divisions do. 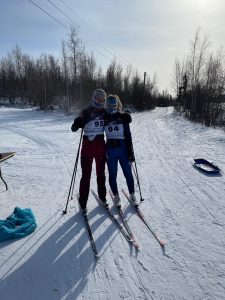 I spent the 2020-2021 season in Yellowknife, taking online classes through Carleton University. I was able to receive a training plan from the Carleton Ravens ski team, while also skiing with the Yellowknife High Performance (YKHP) team.

It was definitely disappointing not to be able to travel to out of territory races this season. That being said, since I was in the NWT all winter, I was able to travel to several communities to help promote skiing.

In early March, I skied the Thebacha Loppet in Fort Smith with several members of the YKHP team. The Fort Smith Ski Club hosted an amazing event, and made us feel very welcome. It was quite a warm day, so we all learned a lot about waxing and which waxes NOT to use!

Near the end of March, I traveled with Rae Panayi to Fort Providence, where we skied with the kids at Deh Gah School. We were only there for three days, but they were jam packed with skiing and fun times! It was cool to share stories about my experience racing. Hearing about some of those opportunities helped to motivated some of the kids to ski really far in the mini-loppet we held!

In April, I traveled up to Inuvik with Annika Olesen to help support the local ski club events and ski with kids at the schools. The ski community in Inuvik was very welcoming, and made us feel right at home! We spent just over a week skiing with there. Some of the students were hesitant about skiing at the start, but by the end of the week, everyone was much more confident and could tackle the hills without a worry. We also volunteered at, and participated in the 51st Top of the World Loppet! It was a very chilly day (-28C!) but we still had a blast! 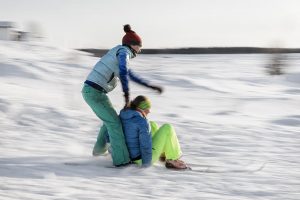 In addition to all of these amazing trips, I’ve been able to help coach one of the Yellowknife Track Attack squads. It’s been pretty cool to work with the same group of athletes for the past six months, as I’ve really gotten to know them well, and can watch their improvements! Several of the athletes I worked with will be moving up to join the YKHP team this summer, and I’m excited to continue to watch them grow as athletes.

The funds from the [Cross Country NWT Post Secondary NWT Skiers Grant] helped me purchase a new pair of ski boots, ski poles, and waxes.  They also allowed me to focus on my training and coaching, allowing me to take time to do things that I love, rather than having to focus solely on work and school.

Thank you CCNWT for your support during this challenging year! I can’t thank you enough for the opportunities that have been provided to me this year.